The history of the Department
History of the Department of Anatomy.
The Department was organized on the initiative of the laureate of the State prize, Professor Of the hospital. Poltoratsky in 1919. The Department had 2-3 rooms, the Department trained students of 1 and 2 courses, about 140 students.
In the years 1920-1922, the Department was headed by Professor I. P. Rozhdestvensky, in the years 1922-1938 Professor S. E. Zimmerman, in 1939-1941 assistant Professor V. Matveev. During these years, a lot of work has been done. In particular, a training Museum was organized, which was equipped with the necessary equipment and materials, a plywood model of the conductive pathways of the brain and spinal cord was created. In parallel, scientific work was carried out. Scientific research was carried out on the influence of various factors on the vascular and nervous system. In particular, the blood supply to the nerves of the upper limb, the pathways of the brain, anatomical features of the lumbosacral nerve plexus (S. E. Zimmerman, V. p. Matveev) were determined.
In 1941-1951 the Department was headed by Professor Z. G. Slobodin. Under his leadership, the work on educational and scientific parts were improved. During these years, attention was paid to the training of local personnel. The activity began such employees of the Department as R. I. Khudoyberdiev, S. S. Sakhabutdinov, R. H. Islombekov and young staff – S. N. Moiseev, S. I. Aralov. Organized histological and morphological laboratory. On issues of the morphology of the autonomic nervous system worked Slobodin Z. G., S. S. Sakhabutdinov, R. I. Khudoyberdiev, V. Matveev, X. Sharapova, H. Z. Zohidov. At the same time was studied the nervous elements of the appendicular Appendix (S. A. Mousem); function parotid gland (R. K. Islombekov – award winner); the nervous elements of the heart (N. A. Voznesenka); functions of the sympathetic trunks (M. G. Dugalov); regeneration of the nervous elements (Slobodin Z. G.); radiological features of the brain (S. I. Aralov); changes in autonomic nervous system malignancy (B. M. Yaroslavtsev); methods of treatment of the stump nerves (N. K. Akhmedov).
In 1960-1986 R. I. khudoyberdiyev was elected head of the Department. Under his leadership, more than 20 candidate and 4 doctoral theses were defended. The number of employees of the Department increased to 17. The scientific potential of the Department has increased. In these years, the Department defended their theses A. T. Akilov, M. G. guliamov, A. M. Mukhtarov, T. D. Abdraimov, Y. A. Kulikov, U. M. Rizaev. In 1967 N. K. Akhmedov defended his doctoral thesis on ” regeneration and degeneration of peripheral nerves under x-rays depending on age”. From 1968 to 1970 he defended his thesis by such staff as Muradilov T. M., Nurmukhamedov B. N., Buzrukov T. M., Mahmudov, I. M. Ushakova, E. J., Yunusov I. I., Kamilov H. H., Ibragimov, F. N.
In 1986, a separate Department of human Anatomy was organized for the sanitary-hygienic and dental faculties, which was headed by honored scientist of Uzbekistan, laureate of the Beruni prize, Professor N. Ah.Akhmedov. He served as head of the Department until 1997.

In 1990-1995 the Department of Operative surgery and topographic anatomy was headed by assistant Professor J. Sh. Fayziev. Since 1995 head of the Department was Professor M. G. Mirzamuhamedov. 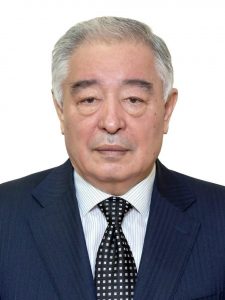 U. M. Mirsharapov defended his thesis on “Morphological changes of internal and external veins of organs in ontogenesis”in 1992. Under the leadership Of U. M. Mirsharapov 2 doctoral dissertations and 6 candidate dissertations were defended. He published more than 190 scientific articles in national and foreign journals. He is the author of 2 textbooks, 30 teaching AIDS, 2 monographs, 3 patents and 1 rationalization proposal. Currently, he manages scientific works on ” Postnatal ontogenesis of blood vessels and internal organs”.
In 1997. Nishonov finished his scientific work on ” the state of blood vessels and tissues of the small intestine after colectomy”. In 2003, T. A. Sagatov defended his doctoral dissertation on “the influence of pesticides on the microcirculatory bed and tissue of the small intestine”.
Brief history of the Department of human Anatomy and operative surgery with topographic anatomy
In 1920, the first higher educational institution in Central Asia – Turkestan state University was organized, which included the medical faculty.
The Department Of operative surgery with topographic anatomy was organized in the same year. The first head of the Department was elected Professor V. Voyno-Yasenetsky, who at the same time was the head of a large surgical Department Of the first city hospital of Glavtashkentstroy.

Georgy Alexandrovich Ilyin.
The method of teaching was changed in the form of the introduction of the so-called active-planned method. Lectures and practical classes were held populationage–proseminars type all employees of the Department. The result of downsizing the Department as the teachers were V. N. Schastnev, I. K. Bochkarev, B. A. Stekolnikov. Scientific work in the form of lack of the most necessary conditions was introduced at this time very poorly. The team was mainly engaged in the organization of the pedagogical process.
From 1925 and 1929, the head of the Department were elected disciple of Professor V. N. Shevkunenko, Professor F. I. Walker, who introduced the teaching method adopted at the chair of his teacher. The forefront of advanced operative surgery, based on which the studied topographic anatomy. The lectures were shown the operation on corpses. These operations were justified by topographic data.

F. I. Walker.
Professor Valker was an excellent teacher and lecturer. His lectures were eagerly attended by students. On his initiative and under his active leadership at the Department were established experimental Department and Museum, established research work of the entire staff of the Department. During his leadership, the Department has published many scientific papers, mostly experimental in nature, on topical issues of abdominal surgery.
In 1929, Valker returned to Leningrad. He worked in the Military medical Academy, he also headed the Department of operative surgery with topographic anatomy of the Leningrad pediatric Institute, which is widely organized the study of topographic anatomy of childhood. Until the end of his life, he did not break ties with the Department of TASHMI.
After the departure of Professor F. I. Walker, head of the Department has been consistently appointed part-time Professor N. With.Peresipkin (1929-1930).